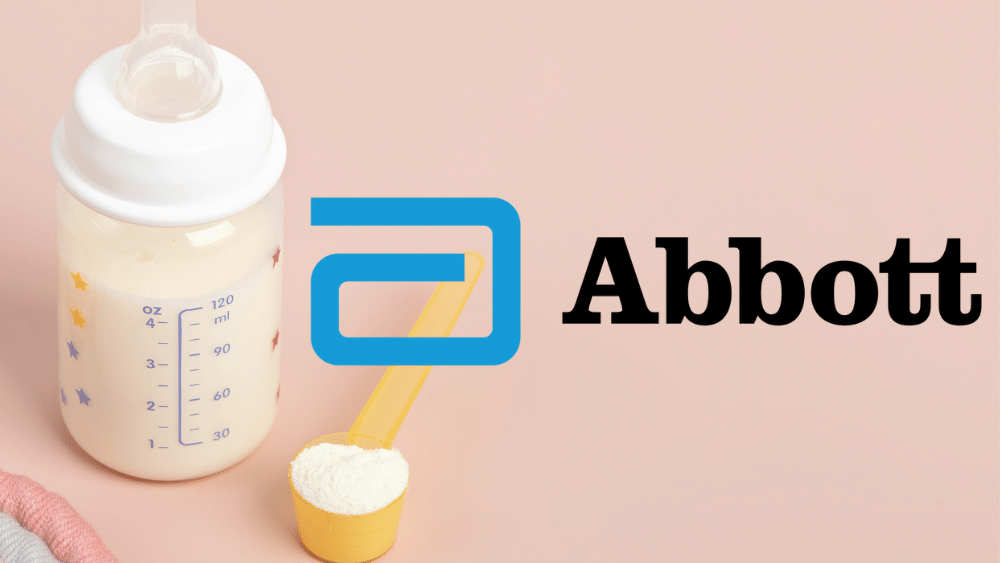 🍼 Abbott: Trouble In A Formula?

Abbott Laboratories (ABT), the largest baby formula manufacturer in the US, is in the eye of a storm. At the heart of the controversy is its unit in Sturgis, Michigan, which produces one-fifth of the total baby formula in the US. Can Abbott find a formula to end its troubles?

According to UNICEF, a vast majority of pregnant women and parents of infants were at the receiving end of targeted marketing from formula milk companies, violating international standards on infant feeding practices.

Abbott ranks among the top healthcare companies globally. It successfully spun off its research-based pharma business into AbbVie in 2013. Over time, it has become the largest baby formula producer in the US.

Breast milk contains a probiotic named 2’-FL HMO (Human Milk Oligosaccharides). Abbott became the first company in the world to provide this substance in the two infant formulae – Similac Pro-Advanced and Similac Pro-Sensitive – launched in 2016. Abbott was awarded the Chicago Innovation Award in 2017 for one of the biggest breakthroughs in infant formulas in decades.

The infant formula market in the US has very high entry barriers owing to extremely tight regulations, thus leaving the market in the hands of a select few. Abbott’s Similac and Reckitt Benckiser Group’s Enfamil sold 80% of the infant and toddler formulae in 2021.

Most of the baby formula in the US is purchased through the Special Supplemental Nutrition Program for Women, Infants, and Children (WIC). The program, which is federally funded, but implemented by states, enables states to award exclusive sales contracts to a single formula manufacturer in exchange for discounts.

Such is Abbott’s domination in this market that it has contracts with 34 states for its product. Reckitt’s Enfamil comes a distant second with 10, while Nestle has contracts for six states. In 2021, Abbott’s infant formula, which falls under its Nutritional Products category, contributed to one-fifth or 20% of the overall topline. But there was more than what met the eye.

As the pandemic began to cripple supply chains across the globe, baby formula began to disappear off the shelves. The severity of the issue only came to light when Abbott halted production at its facility in Sturgis, Michigan, in February this year. The factory produces one-fifth of the total baby formula in the US. It also issued a voluntary recall of products, causing further shortages.

Investigations by the US FDA found traces of a potentially deadly bacteria, raising the possibility that contaminated products from the plant caused illness in several infants. Abbott reached an agreement with the regulator in mid-May that it would address unsanitary conditions that led to the contamination. Production resumed four days later, on May 20, under intense regulatory scrutiny.

All hunky-dory again? Not really. It turns out Abbott had known about these issues much earlier than what was known to the public. A former Abbott employee filed a complaint in February 2021 under the Occupational Safety and Health Administration’s whistleblower-protection program. The same person escalated it to the FDA in October.

This wasn’t the first instance of the Sturgis facility being under the scanner. In 2010, Abbott recalled 5M containers of powdered Similac after discovering beetles or their larvae in them. Subsequent FDA inspections also detected damage to drying equipment, defects in formula cans’ seams, and standing water. An inspection in 2019 found Cronobacter in a batch of formula.

During the first week of May, 43% of baby formula supplies were out of stock at stores across the US. Abbott has restarted the production of Similac and EleCare, a formula for children who struggle to digest other products, along with other specialty and metabolic formulas. The products, though, will only reach the shelves by the end of the month.

Shares of Abbott are down 18% this year. Even then, it trades at a premium compared to its peers. On a trailing-12-month price-to-earnings basis, the stock trades at 27x, compared to Johnson & Johnson and Amgen, both of whom trade at 24x.

What impact the formula fiasco has on Abbott’s financials will be evident soon enough. For now, the company needs a formula to put an end to the issues it’s facing at the Sturgis facility!

Disney held the patent for Technicolor for two years, making him the only animator allowed to make color animated films